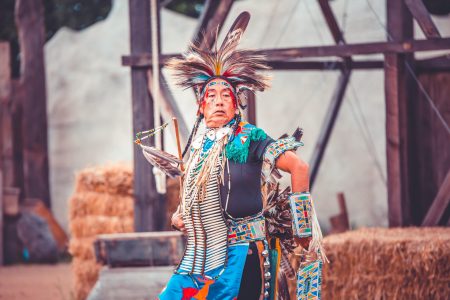 Kendall Old Elk, host of the Native American Weekend, is an enrolled member of the Apsaalooke Nation, Crow Tribe of Indians, from Montana USA. Kendall currently presents, educates and performs not only his culture through shows and events but also acts and presents various shows in EL DORADO Templin.

He has been dancing and singing traditionally as well as competitively (throughout the Powwow World) for most of his life. He has performed professionally for over 30 years, with the last 23 years throughout Europe. He shares the Native American culture, and in specific the Apsaalooke culture, in many ways. Through singing and dance performances, as well as conferences, and Cultural Arts demonstrations.

He has had the opportunity to travel, not only throughout the USA and Europe, but Israel and Moldova (being part of the first group of Native Americans to do so) as well. He has grown up in a very traditional family, being lucky enough to learn the ways of his tribe. He also has had the opportunity to travel extensively, due to the Powwow lifestyle, having the opportunity to meet and learn many different customs and traditions from other tribes as well. With a natural curiosity, he was able to learn many different styles through studies in University, being most interested in Archeology, Native American Studies. He is a veteran of the US Army (Operation Desert Storm 1986-1991). Because of all of these different life experiences, he is very honored to share his culture, not only through dance and singing performances, but through entertaining as well as educating and correcting stereotypes.